I was in Los Angeles at UCLA doing a residency in neurology, but I was also very much on the beach — on Venice Beach, muscle beach.  There, there was very much a drug culture, as there was in Topanga Canyon where I lived.  One day, someone offered me some pot, and I took two puffs from it.  And I’d been looking at my hand for some reason, and the hand seemed to retreat from me, but at the same time get larger and larger, until it became sort of a cosmic hand across the universe, and I found that astounding. … I was fascinated that one could have such perceptual changes, and also that they went with a certain feeling of significance, an almost numinous feeling.  I’m strongly atheist by disposition, nonetheless when this happened, I couldn’t help but think that that was what the hand of God was like.

From Terry Gross’ excellent 2012 interview with Sacks.  Definitely worth a listen:

It’s impossible to summarize the life and work of the great neuroscientist Oliver Sacks.  You can read about him and his many books, including Awakenings and The Man Who Mistook his Wife for a Hat here.  Just today, the New York Times published a beautiful piece in which Sacks reveals and responds to his diagnosis with terminal liver cancer and his impending death.  He concludes:

I cannot pretend I am without fear. But my predominant feeling is one of gratitude. I have loved and been loved; I have been given much and I have given something in return; I have read and traveled and thought and written. I have had an intercourse with the world, the special intercourse of writers and readers.

Above all, I have been a sentient being, a thinking animal, on this beautiful planet, and that in itself has been an enormous privilege and adventure.

Sacks will leave the world having vastly deepened our understanding of the human mind, and in particular the terrible and glorious aspects of the mind in extremis.  He spoke openly and evenly (if a bit shyly) about his own experiences with psychotropic drugs, including marijuana.  May his own wishes for the end of his life come to pass. 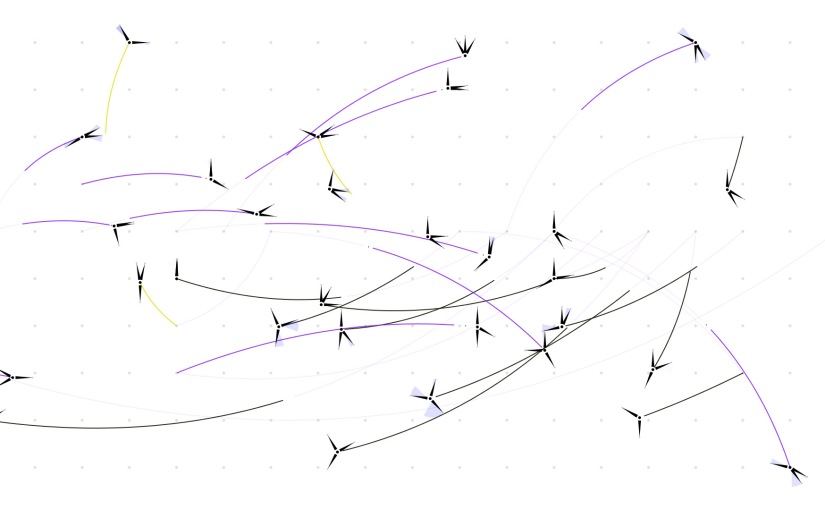 Re-reading Carl Sagan‘s Mr. X essay made me think about recent experiences with music while high.  He writes:

A very similar improvement in my appreciation of music has occurred with cannabis. For the first time I have been able to hear the separate parts of a three-part harmony and the richness of the counterpoint. I have since discovered that professional musicians can quite easily keep many separate parts going simultaneously in their heads, but this was the first time for me.

Music has always been a part of my own life.  I’m a piano player with some years of classical training, and some experience as a jazz player.  Though I’m well out of practice, my ear is relatively well developed, at least in terms of things like following harmonies and counterpoint etc.  That said, my experience of listening to music while high is enhanced in what I take to be same way as Sagan’s.  In particular, the way I experience counterpoint, melody and structure in music changes when I’m high vs. when I’m straight.  I notice many structural elements and compositional choices … or maybe it’s that I notice them in a new way — they seem somehow more important, crucial.  I also experience sequences and passages of notes in new ways.  When I close my eyes and listen to some music rich in counterpuntal lines, I’ve oftentimes felt as though the lines of music were physically present in my body — a line in a Bach cello suite, for example, may present itself as a trail of connected feelings in my left arm.

A rapid, staccato sequence might make its way up my trunk and into the core of my body, and then dissolve or sublimate as it encounters another thread of sensation corresponding to another musical line from some other region of my body.

Not surprisingly, I experience the emotional aspects of music much more fiercely when high than when straight.  The emotions I feel are sometimes just amplified versions of what I’d feel while straight, such as the extra-powerful rush I feel while listening to something like this:

But the emotional changes are sometimes even more powerful than that:  I’ve felt as though my experience of choral music in particular has produced some extremely powerful feelings and experiences.  For example, in the following piece (which is gorgeous and worth a listen, high or not):

… when the choir hits and holds its glorious harmonic resolution (around 5:13 in the video.)  At the time, I was laying in a warm dark room, wearing headphones and looking inward as the music wound and swelled through my body.  When that penultimate chord dropped — the one where the basses descend to their lowest point and the choir widens into a stunningly open chord — it was as if at that moment, the dark space within me opened in a kind of dimension-defying way.  I felt as though I had discovered that the black tunnel within my closed eyes had suddenly opened into a vast and unexplored space that while still obscure to my vision, was incomprehensibly more huge and all-encompassing than I’d ever realized.  It was as if I’d been walking in a small dark passageway and suddenly stumbled out of a doorway and onto the foyer of a dark cavern whose dimensions were equal to those of the universe itself.  It was that music, and in particular the openness of that chord, which allowed that perception to explode within me.  Without the chord I would not have felt the space, or the wonder accompanying the perception of it.  And as with the musical chord, as soon as it was there and established, the wideness began to fade and recede and before long resolved back into normal sensation as the harmonic tension was released.

As Sagan notes, these sensations are intensely present in these kinds of moments while high, but they also tend to persist.  This seems to be a matter of memories becoming reactivated when we listen to the same piece of music.  But these experiences also alter musical perception permanently in some way that I don’t yet fully understand.

Just flipping back through my toke journal I notice that I don’t tend to draw images that often, but when I do it tends to be in response to a feeling of what I can only call linearity.  I tend to draw simple designs including parallel lines contracting to a perspective point, or lines originating from a point as rays, and it always seems to be in response to what I describe as a feeling that is wordlessly connected to this geometric arrangement.

(describing a high)  now it’s all coming into the linear groove: 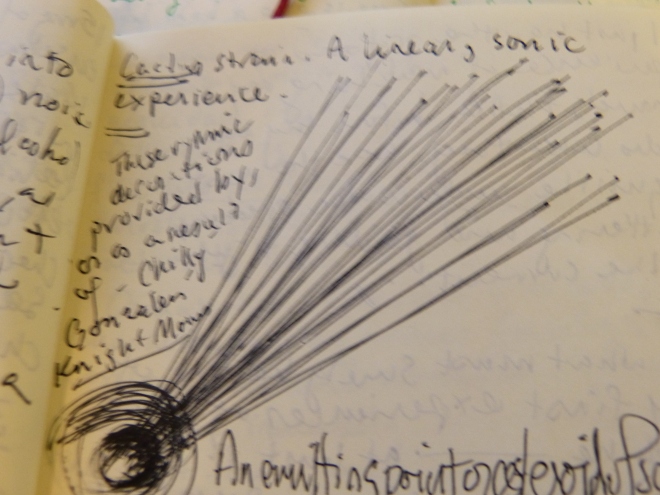 I’m not altogether sure that this is remarkable, but two things:  I want to draw and sketch more while high, and maybe I care about this because I’ve always harbored a certain amount of jealousy towards those with synesthesia —  a condition wherein a cognitive or  sensory stimulus of one kind stimulates a sensory or cognitive response of another kind.  Synesthetes can, for example, experience sounds as colors, or sights as tastes.  It’s always seemed like a gift

Part of the way I show respect for the herb is by writing something — even a little bit — about how I’m feeling, what I’m doing and why I’m smoking whenever I consume.  I do this in a little journal (well now journals, since I’ve filled the first and begun a second) which I keep with my pot and other supplies.  The journal fulfills several purposes:  it tracks my usage frequency to a fairly accurate degree, as I’ve actually been fairly faithful about writing in it whenever I consume.

It also helps me record my motivations for using cannabis, whether those involve needing to unwind at the end of the day (a rather common motivation as it turns out) medicating a particular pain or other condition, reducing anxiety, or some other reason.  These two purposes allow me to paint a fairly accurate picture of my relationship with cannabis.   For instance, I happen to know that my current path with marijuana began on October 14, 2013 at 6:30 pm, and that I’ve consumed at least 80 times since that date, or approximately 6 times in each 5 week period over that time.  Perhaps if I get really curious about the details I’ll do some more metrics on my usage patterns, and also take an overall look at my recorded motivations for each of those uses.

But perhaps more interesting than these quantifiable metrics are the psychonautic and subjective aspects of the writing that occurs when I smoke.  Just reading back a little bit over what I’ve written, it’s clear that I love describing the experiences — physical, and mental — that occur when I smoke.  Psychonautics (defined as any methodology seeking to describe the subjective experience of being high) might feel like old hat to some folks, or rather boring, or maybe something not really as applicable to marijuana as it is to more strictly psychedelic drugs, but it’s one of the core reasons (along with health) that I use pot at all.  My journalling so far is full of descriptions of the nature of each high.  These descriptions vary in posture from that of the critic (though I hate substance snobbery, I have to admit that I slide into it at times in these journals) to that of a sort of wide-eyed traveller into what experiences can be gleaned from unlocking the mind with marijuana.

“I have always loved marijuana. It has been a source of joy and comfort to me for many years. And I still think of it as a basic staple of life, along with beer and ice and grapefruits – and millions of Americans agree with me.” – Hunter S. Thompson

Let me be clear:  much of what I write in these journals is cringeworthy, trivial, or both.  Much is also boring.

in the world of real writers, debates abound regarding the particular merits of writing while high, with the majority, including a particularly well-intentioned experimenter seeming to conclude that any serious writing done while high can’t be all that good.  On the other hand, there are writers who claim to write mostly or exclusively while high.  That Hunter S. Thompson wrote (and did many other things) under the influence of the herb should surprise almost no one, but what about a best-seller like Lee Child, who famously claimed to write almost exclusively while smoking pot?  Quite honestly, it doesn’t matter much to me.  I’m make no claim to being a great writer, or at the very least not while journaling about my marijuana use.  But I do recommend the practice of pot-journalling.  Here are some tips if you decide to try this: