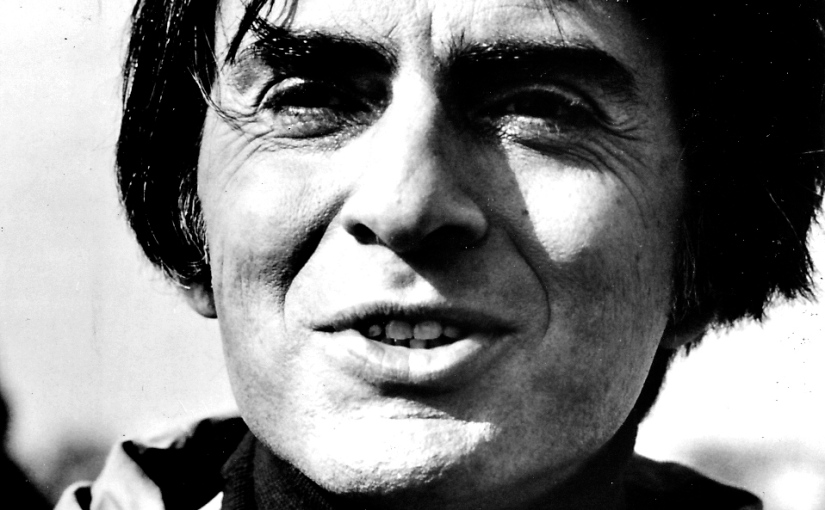 Like so many others,  I first encountered the great thinker, astronomer and teacher Carl Sagan through Cosmos (the original PBS series.)  Though too young to have watched it when it first aired, I probably first saw and understood it in the mid-eighties.  I particularly remember sitting on our family room couch with my father watching weekly installments of the show, which, if you haven’t seen it, is as amazing a picture of the scope and contents of the universe as we are likely to ever see.  The updated series, featuring Neil deGrasse Tyson is almost as sublime.  Both series are fantastic straight, but are also really compelling when under the influence of a reasonable amount of your favorite cannabis.

Carl Sagan was a scientific polymath whose career spanned astrophysics, genetics and astrobiology, planetary science (he discovered many early facts about the atmospheres of Venus, Saturn and various moons) the early formation of life and the consequences of nuclear war. He was also a great communicator and teacher whose legacy now includes thousands of scientists now working in all of these fields, and millions of others who were inspired by his television work and writing.

What’s perhaps known by fewer people (though now can hardly be called much of a secret) is that Sagan was also a passionate user of cannabis sativa and a brave advocate for its legalization. Though he publicly endorsed California’s medical marijuana bill before his death in 1996, his most famous and eloquent expression on the subject came long before. Writing as Mr X, Sagan composed a marvelous essay for inclusion in the 1971 compilation Marijuana Reconsidered. Even in those days just before the madness of the mega-criminalization introduced by Nixon and super-charged by Ronald Reagan, it’s likely that his public credibility and possibly his scientific career would have been compromised had he revealed his identity. But Sagan’s anonymity doesn’t lessen the importance or interest of this essay. If you haven’t read it, I invite you to have a nice toke, sit back, and take a few minutes to read it now. Or, for those in a hurry, here’s a snippit from the essay’s last paragraph:

There is a very nice self-titering aspect to cannabis. Each puff is a very small dose; the time lag between inhaling a puff and sensing its effect is small; and there is no desire for more after the high is there. I think the ratio, R, of the time to sense the dose taken to the time required to take an excessive dose is an important quantity. R is very large for LSD (which I’ve never taken) and reasonably short for cannabis. Small values of R should be one measure of the safety of psychedelic drugs. When cannabis is legalized, I hope to see this ratio as one of he parameters printed on the pack. I hope that time isn’t too distant; the illegality of cannabis is outrageous, an impediment to full utilization of a drug which helps produce the serenity and insight, sensitivity and fellowship so desperately needed in this increasingly mad and dangerous world.

If only he had lived to see the day.